On September 13, 2020 at approximately 12:17 AM, Officers were dispatched to a residence on El Rio St., regarding a report that Luis Martin Ortiz was vandalizing the reporting party’s vehicle and had stolen her cellphone.  The reporting party advised dispatch that Ortiz left the location and provided a description of the vehicle he was driving.  While Officers were responding to the area; they observed a vehicle that matched the description of the suspect’s vehicle, driving northbound on S. Orchard Avenue.  An Officer initiated an enforcement stop on the vehicle, in the 400 block of S. Orchard Avenue. The vehicle yielded briefly, but then drove away northbound.  The vehicle continued to ignore the Police vehicle’s emergency lights.  The vehicle’s driver drove onto Peach Street, in the on-coming traffic’s lane, failed to stop at a controlled intersection and then continued south on Leslie Street. The driver again drove in the on-coming traffic’s lane and eventually yielded in the driveway of a residence, in the 500 block of Leslie Street.

The driver, who was identified as Luis Martin Ortiz, was taken into custody without further incident.  Officers confirmed that Ortiz had just left the reporting party’s residence and that an argument had occurred.  No evidence of a theft was located on Ortiz or in his vehicle.  Ortiz was found to be on PRCS (Post Release Community Supervision), from this county.  He was found to be in violation of numerous terms of his PRCS.  Additionally, UPD had two prior cases within the past month for which Ortiz was wanted and there was probable cause for his arrest in both of those cases.

The second prior case was reported on August 24, 2020.  In this incident Ortiz contacted the protected party in a served domestic violence restraining order, in violation of the terms of the order.

Ortiz was subsequently transported and lodged at the MCSO Jail for the aforementioned violations. 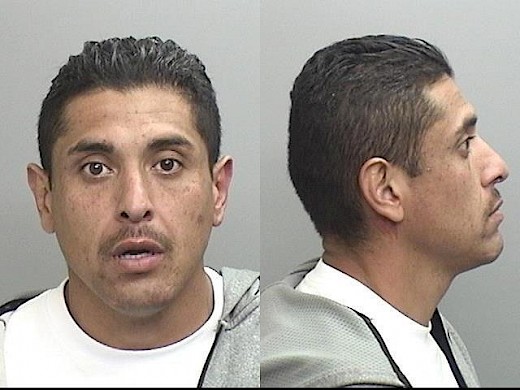