On May 6th at about 7:53 PM, Officers were advised of a possible structure fire behind The Furniture Design Center, located at 1205 Airport Park Blvd.  Officers were told that Ukiah Valley Fire Authority (UVFA) was responding as well.  Upon arrival, Officers observed a pile of wooden pallets and some dry grass near them were on fire.  UVFA arrived and extinguished the fire.  A preliminary assessment by UVFA indicated an Arson had occurred and Officers began an investigation.  Officers learned a local transient male, named Fredrick Fitch, was seen in the area of the fire, before it ignited, and he was seen leaving the area after the fire began burning.  Officers were familiar with Fitch from prior law enforcement contacts.  A search of the area was conducted and he was not located at that time.

On May 6th at about 8:29 PM, Officers were advised that UVFA was being dispatched to several fires that were reported to be burning along the railroad tracks and in the field south of Emerald Sun, located at 1601 Airport Rd. Officers responded and upon arrival observed four fires burning, both on the railroad tracks and in the field.  As the fires appeared suspicious, an investigation was initiated.  UVFA arrived on the scene and extinguished all four fires.  The items burned consisted of a shopping cart full of debris and railroad ties.  Again, a preliminary assessment by UVFA indicated an Arson had occurred.

Officers contacted an employee at Emerald Sun and learned the business had surveillance cameras that captured footage of the area where the fires originated.  Officers reviewed the footage saw a male, who they recognized as Fredrick Fitch, was present at two of the four fires.  Officers provided this information to UVFA and requested and Arson investigation be initiated by that agency as well.  Officers searched the area for Fitch, but he was not initially located.

On May 6th at about 9:53 PM, an Officer was patrolling in the area of Talmage Rd. and saw Fitch in the area of the Great Redwood Trail.  The Officer noticed Fitch was wearing what appeared to be the same clothing as seen in the surveillance footage.  The Officer was aware Fitch was on probation and that one of the terms of his probation was that he was subject to search and / or seizure.  The Officer contacted Fitch and discovered he was in possession of a large concealed machete, inside his backpack, as well as a knife.  Fitch’s probation further included a term that he could not possess a dangerous weapon, including knives.  Fitch was placed under arrest, without incident, for violations of his probation terms and for possession of a concealed dirk or dagger.  He was additionally arrested for an outstanding misdemeanor warrant from this county.

A subsequent search of Fitch’s backpack revealed a small camping size propane tank and a torch attachment for the tank.  Fitch denied any involvement in any of the five fires from earlier that night.  Fitch was lodged at the MCSO Jail for violations of 21310 PC, 1203.2(a) PC and the warrant.

The UPD and UVFA Arson investigations continued throughout the following days.  UVFA’s Arson Investigator concluded all five fires were intentionally started using an “open flame device”.  Upon completion of UPD’s investigation; it was determined there was probable cause that Fitch was responsible for all five fires.

On May 11th, Fitch was booked on five counts of 451(c) PC and three additional counts of 1203.2(a) PC.  Due to the recent changes to the bail schedule in California, the bail for 451(c) PC was to be set at zero dollars.  Due to the actions of Fitch, the danger to the community and his prior criminal history; an emergency bail increase was approved by a local Magistrate and his bail was set at $30,000.00 for each of the two Arson cases.

The Ukiah Police Department would like to thank the UVFA personnel who assisted with the investigation of these incidents.  As a reminder, we are approaching the time of year when the risk of fires is increased.  Citizens are urged to exercise fire safety and to report any suspicious persons in the area of fire activity to law enforcement and / or UVFA. 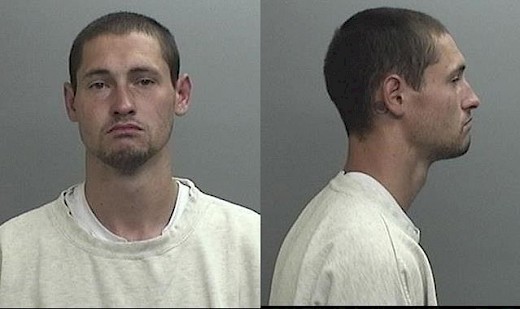