On 8/16/2020 at approx. 0621 hours, UPD Officers were dispatched to 814 N. State Street regarding a report of a fire behind the business. UPD Officers arrived on scene and located a debris pile behind the business that was on fire and threatening the structure. UPD Officers retrieved fire extinguishers from their patrol vehicles and used them to stop the progress of the fire enough until UVFD firefighters arrived on scene and extinguished it completely. The fire burned the debris pile and scorched the back side of the building causing minor damage.

As UPD Officers were investigating the above fire, they observed black smoke rising from behind 955 N. State Street. UPD Officers responded to the area and located a dumpster behind the building which was engulfed in flames. UVFD arrived on scene and extinguished the blaze. UPD Officers continued their investigation into the above fires and were able to obtain video surveillance from a nearby business showing a female adult setting the dumpster ablaze.

On 8/18/2020 at approx. 1800 hours, UPD Officers came into contact with a female adult who matched the description of the arsonist. UPD Officers identified her as Kristine Lynn Tupper, a 46-year-old transient from Ukiah. UPD Officers interviewed Tupper regarding the arsons and she admitted to starting them. Tupper was arrested for violations of 451(c) PC (Arson of structure or forest land), 451(d) PC (Arson of property) and 1203.2(a) PC (Violation of probation).

Due to the circumstances surrounding Tupper’s arrest, UPD Officers contacted the on-call Judge and requested a bail enhancement for the offenses. A bail enhancement was granted in the amount of $100,000. Tupper was booked into the Mendocino County Jail for the above offenses. The Ukiah Police Department would like to remind the great citizens of Ukiah that during the current COVID-19 pandemic we are still out in the city enforcing the law and keeping the public safe. As always, our mission at the Ukiah Police Department is to make Ukiah as safe as possible. 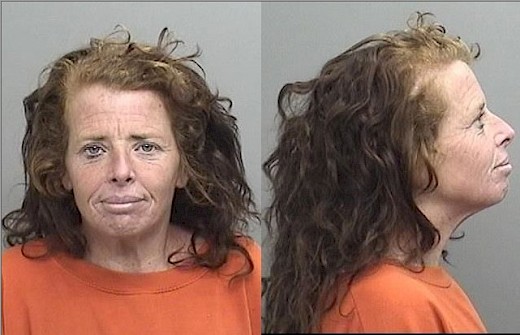