On August 7, 2022 at approximately 11:19 PM, UPD Officers and Ukiah Valley Fire units were dispatched to the area of N. State Street and Garrett Drive for a traffic collision involving a silver sedan and two pedestrians. Upon arrival, officers observed an adult female pedestrian lying on the ground along the west side of North State Street. She was unresponsive and received medical attention from EMS and Fire personnel who were on scene. The adult female sustained major injuries and was transported to Adventist Health Ukiah Valley (AHUV). The second pedestrian was an infant child who was in a stroller at the time of the collision. The infant was also transported to AHUV and was later released from the hospital after it was determined the infant did not sustain any injuries.

The driver of the sedan, identified as German Dominguez-Galindo, approached officers on scene and advised he was the driver of the vehicle. Dominguez-Galindo displayed objective signs and symptoms of alcohol intoxication and was determined to have been operating the motor vehicle while under the influence of alcohol. He was placed under arrest for the aforementioned violation and was later transported to the MCSO Jail. Dominguez-Galindo’s vehicle was located parked in a nearby parking lot with moderate damage to the front of the vehicle and was impounded as evidence by UPD.

North State Street was closed from Magnolia Street through Garrett Drive for approximately three hours while the scene of the collision was processed. The adult female was ultimately transported to an out-of-county hospital and is still in critical condition.

At this time, the investigation shows the sedan was traveling southbound and collided with the female and infant who were crossing the roadway from the east sidewalk towards the west sidewalk of North State Street near the entrance of the Redwood Empire Fair. It is believed the female and infant victim were not inside a crosswalk at the time of the collision. The investigation into this collision is on-going and the Ukiah Police Department would like to urge anyone who witnessed the collision to contact UPD Detectives to provide additional information.

The Ukiah Police Department would like to thank the California Highway Patrol, Mendocino County Sheriff’s Office, State Parole, and the Mendocino County Probation Department for their assistance with this incident. UPD also wants to remind the Ukiah community to exercise safe and defensive driving techniques and to follow the speed limits.

As always, our mission at UPD is to make Ukiah as safe as possible. If you would like to know more about crime in your neighborhood, you can sign up for telephone, cellphone, and email notifications by clicking the Nixle button on our website; www.ukiahpolice.com . 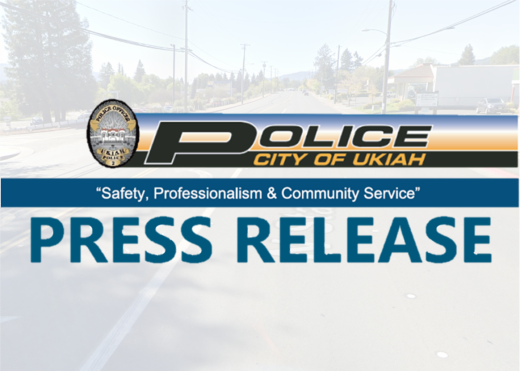