On April 13, 2021 at approximately 5:59 PM, UPD Officers were dispatched to the area of the pocket park, which is located along the south edge of E. Perkins St. at Doolan Creek, for a reported vegetation fire.  Officers arrived and observed an approximately 15’x15’ area of dried grass, within Doolan Creek, that was actively burning.  Officers utilized their fire extinguishers to put the fire out.  While at the scene, UVFD personnel arrived and advised they had responded to another vegetation fire within the previous 30 minutes.  This fire was located along the railroad tracks and was just east of the Redwood Empire Fairgrounds (REF).  Based on the two fires occurring near the railroad tracks and within a short amount of time; UVFD personnel and Officers suspected they may have been intentionally started.  UVFD personnel determined both fires to have be intentionally set, as there was no other apparent source of the fire.

Officers began checking the area and while doing so were contacted by a resident, in the 200 block of E. Clay Street.  The witness advised he observed a male walking along the railroad tracks, carrying a propane torch and stated they saw the male light a flower and an area of grass on fire.  The male was seen stomping the fire out.  The witness provided a description of the male.

Officers continued checking the area and located a male, who matched the description provided by the witness, in the area of the Grace Hudson Museum.   The male was identified as Thomas Hidalgo.  Hidalgo was in possession of a propane torch and had portions of his clothing burnt.  Hidalgo was also found to be in possession of a dirk or dagger, as defined in 16470 PC, concealed in his waistband.  Hidalgo was detained without incident and made statements confirming he had been in the area of the fire near REF.

Officers located the two small fires, which the witness had described.  Both of these small fires were less than 2’x2’ in size.  The witness identified Hidalgo as the person they had seen carrying the torch and starting the two small fires. Hidalgo was found to be on Summary Probation, from this county for previous misdemeanor violations.  A term of his probation was “obey all laws”.  Based on the declared state of emergency, in California, it was determined a violation of 452(A)(2) PC- Arson during a state of emergency had also occurred.

Hidalgo was arrested for the above-mentioned violations and was subsequently booked at the MCSO Jail.  He was held on $50,000.00 bail.

UPD would like to thank UVFD personnel for their assistance in the investigation of these incidents. 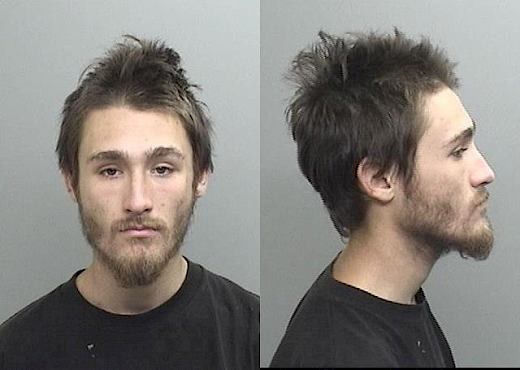