On February 23rd at about 9:49 PM, Officers were dispatched to the area of Wal-Mart, located at 1155 Airport Park Blvd, regarding a male subject who was refusing to leave the property and was reportedly naked. UPD Officers arrived and located a male victim (25 years old). The victim suffered from an injury to one leg, causing him to need a wheelchair to travel without discomfort.

Officers learned of a strong-armed robbery involving two female and two male suspects. Two suspects pulled the victim from his wheel chair as the others remained in and around the suspect vehicle, preparing to flee. The victim’s clothing was pulled off during the struggle over the wheel chair. The suspects loaded up the wheelchair and fled the scene.

All of the involved suspects and victims were homeless and residing in the City of Ukiah. The investigation revealed that the four suspects gathered and conspired to take the wheelchair from the Victim for use by one of the group members. They carried out that plan, forcing him from his wheelchair and leaving the victim in the state that resulted in the request for service.

The Victim was tended to by AHUV. Clothing was donated to the victim by Building Bridge. His wheelchair was located and returned to him.

As always, our mission at UPD is to make Ukiah as safe a place as possible.  If you would like to know more about crime in your neighborhood, you can sign up for telephone, cellphone, and email notifications by clicking the Nixle button on our website; www.ukiahpolice.com . 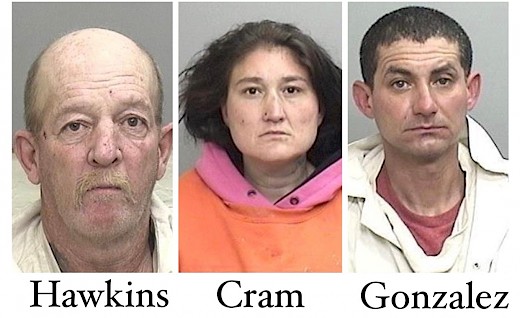