On 8/19/20, at approx. 11 AM, UPD Officers and Ukiah Valley Fire Dept. responded to a vegetation fire in the creek behind Oak Manor School (400 Oak Manor Dr.). Upon arrival, a citizen was extinguishing the fire with a garden hose. A UPD Officer was able to fully extinguish the fire with a fire extinguisher. At the same time, UPD Officers noticed a column of smoke coming from behind Big Lots, located at 225 S. Orchard Ave. Officers responded there and found the contents of a garbage dumpster was on fire. Ukiah Valley Fire Dept. responded and extinguished that fire.

Law enforcement officers from multiple agencies saturated the area looking for a suspect and/or more fires. Officers were able to review surveillance footage from neighboring businesses and were able to identify the suspect. The suspect was described as wearing a yellow hat, dark shirt, light colored pants, and a black backpack. This information was disseminated to other officers who were searching the area.  The suspect, later identified as Esteban Rodriguez (28-year old transient), was located at the intersection of Leslie St. and E. Perkins St. approx. an hour after the fires.

After questioning Rodriguez, enough information and evidence was collected to determine Rodriguez was responsible for setting the fires that had just occurred.  Officers requested a bail enhancement which was granted.  Rodriguez’ bail was set at $250,000.  Rodriguez was booked into Mendocino County Jail for two counts of arson, two counts of arson during a state of emergency, and violation of probation (on probation for a violation of 11377(a) HS possession of a controlled substance).

This investigation is ongoing and we are gathering more evidence in an attempt to determine Rodriguez’ possible involvement in regards to the 8 other fires that had occurred in the Ukiah area during the 24 hours prior to Rodriguez’ arrest.

The attached booking photo of Rodriguez is from 2019. 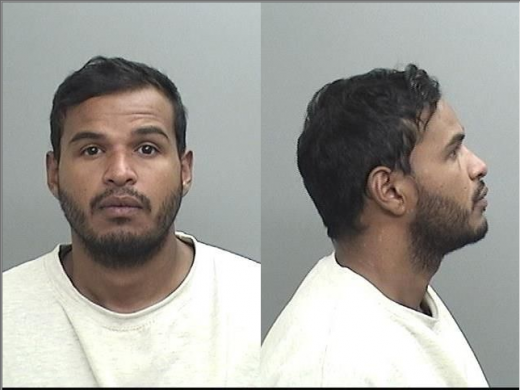