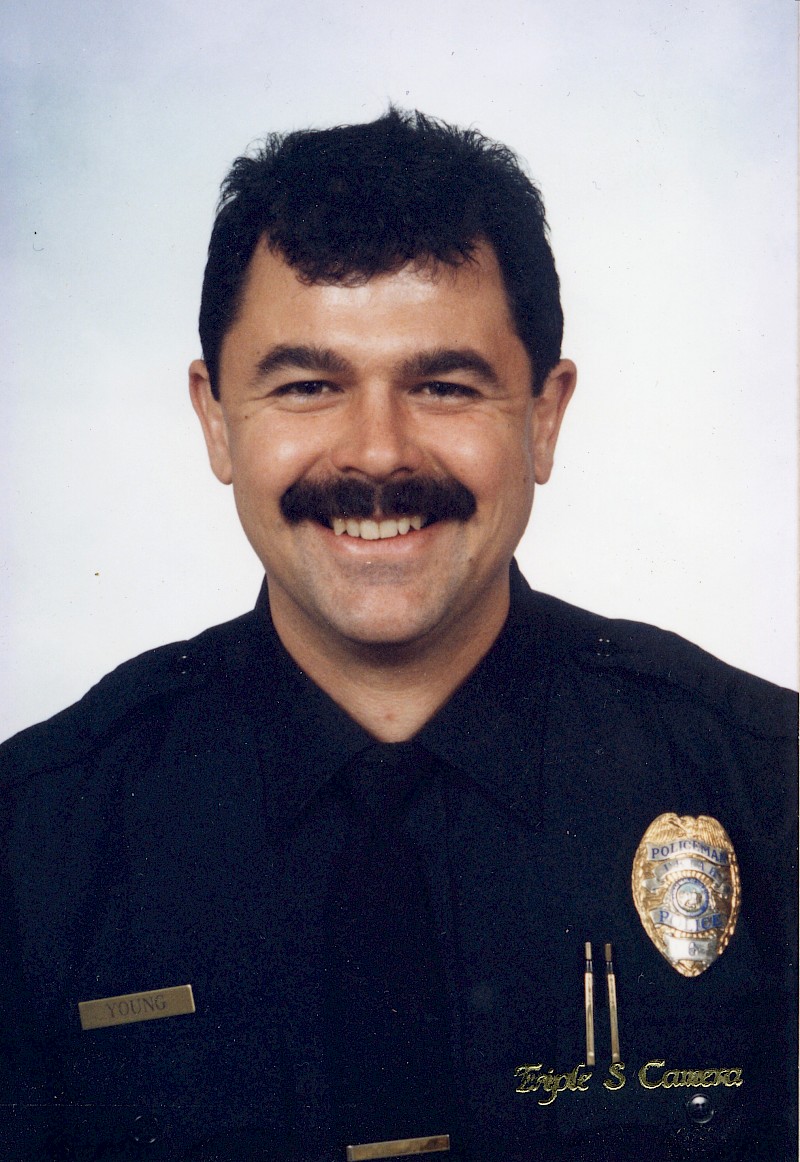 Even after having his hand almost cut in half, and being shot with a .38 caliber pistol five times in the face, arm, and body; Sergeant Young found the courage and strength to protect the citizens of Ukiah.

Sergeant Young, the Ukiah Police Department, and our entire community were forever changed by the events of that night. We owe Sergeant Young a warm thank you and debt of gratitude for his willingness to protect and serve us.

This is the story of March 7, 2003 as reported in Parade Magazine:

Young’s ordeal began when he was called to the local Wal-Mart to arrest an 18-year-old female shoplifter. He was accompanied by Julian Covella, then 17, a high school student and police cadet. During the arrest, Young was approached by the shoplifter’s boyfriend, Neal Beckman, 35, a violent felon. When Young told him to take his hands from his pockets, Beckman pulled a knife.

Young seized the felon’s arm and twisted it toward his back. Beckman then drew a .38 Smith & Wesson from his jacket, reached across his body and shot Young five times. Bullets pierced his cheek, back and upper arm. Young’s body armor stopped bullets to his chest and back, saving his life.

The assailant’s gun was empty, but he still had a knife when Brett Schott, the store’s unarmed security guard, jumped on his back and knocked him away from Young. Beckman stabbed Schott in the upper chest and ran toward the patrol car, where Young had left his rifle and shotgun.

“I was on my knees in a parking space,” Young recalled. “My right arm was paralyzed, my left hand had a two-inch tear between the index and middle fingers, and I could not draw my gun. I was bleeding profusely.”

As terrified bystanders screamed and ran for cover, Young remained calm. He called Covella— who had just radioed for backup—to his side and asked the cadet to unholster his pistol and place it in his left hand. Young fired four rounds, stopping Beckman before he could grab a firearm from the patrol car and start shooting again.

When help arrived, Young, Schott, and Beckman were taken to the local hospital, where Beckman was pronounced dead. Schott recovered from his wounds; Young continues to struggle with pain and weakness in his bullet-riddled upper body.

But he’s alive. “I thought the entire time that I was going to die,” Young recalled. “I told an officer to tell my wife I loved her, because I didn’t think I would get to do it myself.”

For that chance, he thanks Covella and Schott. “They were the real heroes in this situation,” Young said. “They risked their lives to help me, to help an officer out. I wouldn’t be here if it wasn’t for them.”

After this horrific event:

Marcus had a number of major surgical procedures and returned to work shortly after each surgery, because he wanted to be a positive example for others, and because he sincerely wanted to work. Despite his pain and trauma, Marcus remained extremely optimistic that he could return to full duty as a police officer. He remained dedicated to the citizens of Ukiah.

In August 2003, just six months after this horrific event, Sergeant Young graduated from the University of San Francisco with a Bachelor of Science degree in Organizational Behavior. In 2003-2004, Sergeant Young worked with California Peace Officer and Standards Training to develop a training course titled, “Fear & Anger: Mastering the Hidden Enemy” that was sent to more than 600 police agencies.

While he recovered from his injuries, Sergeant Young was recognized by the City of Ukiah in 2003, awarded the Medal of Valor by President Bush in 2004, and again by Governor Schwarzenegger in 2005. Sergeant Young also received a number of other prestigious awards, including the National Peace Officer of the Year from the International Association of Chiefs of Police, Parade Magazine, and the American Police Hall of Fame.

Sadly, Sergeant Young was unable to return to duty as a police officer because of his injuries, and he retired in 2006.

After retiring, Sergeant Young worked as the Director of Public Safety Programs for Mendocino College, and today, he is an expert on law enforcement deadly encounters, and a national and internationally known speaker.

Marcus travels throughout the nation and world, dedicating himself to protecting law enforcement officers. He spends his time teaching law enforcement personnel about dangerous encounters and how to protect themselves when faced with these horrific, critical incidents.

On a cold night in March of 2003, the Ukiah community was extremely lucky to have a police officer as dedicated as Marcus Young. I have no doubt that the response by Sergeant Young to this brutal assault helped save not only his life, but also the lives of Brett Shot and the innocent civilians in the parking lot.

We can only imagine the further destruction that might have been had Beckman been able to arm himself with the weapons available in the patrol car and the pipe bombs he had in his vehicle.

Marcus is one of the most courageous and noble people I have ever known, and I am extremely fortunate to call him a friend.

He often reminds me that each day, countless law enforcement professionals just like him spend their time protecting us from extremely dangerous people.

As a Police Chief, I can’t thank Marcus and the rest of our law enforcement professional officers, and 911 dispatchers enough for the daily sacrifice they make to assure our safety. So, I’ll say it again. Thanks to all of you who keep us and our families safe.

As always, our mission at UPD is simple: to make Ukiah as safe as possible. If you have any suggestions or comments about how we can improve, please feel free to call me, complete our online survey, or leave a crime tip on our website: www.ukiahpolice.com.