Violations: 25850(a) PC: Carrying a loaded firearm in a vehicle while in public (Felony)

11370.1(a) HS: Possession of a controlled substance while armed (Felony)

On September 11, 2020 at approximately 5:11 AM, Officers observed a sedan driving southbound on S. Orchard Ave. without its lights activated, during hours of darkness.  Officers attempted to conduct a traffic enforcement stop on the vehicle, which yielded briefly near the intersection of S. Orchard Ave. and Marlene Street.  The vehicle then sped away from the Officer’s patrol vehicle at unsafe speeds within a residential neighborhood.  The vehicle failed to yield to the Officer’s Patrol vehicle’s emergency lights, failed to stop at several controlled intersections and then drove southbound on US 101.  The driver of the vehicle continued driving southbound at speeds in excess of 105 MPH and crossed into the lane of oncoming traffic on several occasions.  UPD requested assistance from CHP and MCSO, as the pursuit was traveling well outside of the City of Ukiah.

In the area of Hopland, CHP assumed control of the pursuit and the suspect vehicle drove westbound on Mountain House Road.  The driver of the vehicle continued driving in an unsafe manner on a very rural and winding road.  Approximately one mile east of the intersection of Mountain House Rd. and HWY 128; the vehicle stopped abruptly and impacted a fence.  UPD, CHP and MCSO Deputies completed a high risk (Felony) traffic stop on the vehicle and the two male subjects were detained, without incident.

The driver was identified as a 17-year-old male, from Ukiah, who was on Formal Juvenile Probation for a prior violent Felony and was an unlicensed driver.  The suspect’s probation included numerous terms, including prohibition of possessing firearms / ammunition, obey all laws, no gang association and no dangerous weapons.  A loaded pistol was located on the driver’s seat of the vehicle.

The passenger was identified as Christian Hernandez, from Ukiah.  A loaded semi-auto pistol was located at the front passenger seat.  The pistol met numerous requirements that qualified it as an assault weapon.  He was also found to be in possession of a controlled substance.

Both suspects were placed under arrest and transported back to Ukiah. Hernandez was booked at the MCSO Jail and the juvenile was housed at the Mendocino County Juvenile Hall. The investigation into this incident is on-going and the collected firearms will be compared to evidence collected from other recent shootings.

The UPD would like to thank the CHP Officers and MCSO Deputies for their assistance with this incident. 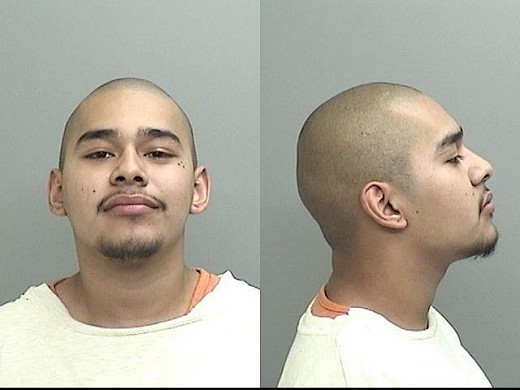